It’s been a bit more than a year since my bra-velation, and since then I’ve had the opportunity to try 8 or 9 bras from the dazzling full bust brand, Curvy Kate.  I am very sad to report that none of these beautiful bras ended up “sticking.” Rather, after trying a Curvy Kate bra, I usually end up feeling like this: 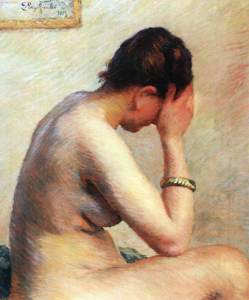 END_OF_DOCUMENT_TOKEN_TO_BE_REPLACED

When big, flowy, boxy-cut tops hit mainstream fashion circa 2007, I was instantly attracted to them.  I bought quite a few.  Unfortunately, I don’t think I really knew how to wear them.  And I didn’t know that I didn’t know, until I saw myself in photos: 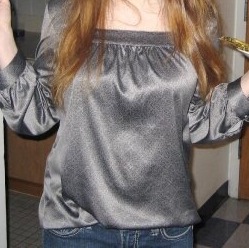 END_OF_DOCUMENT_TOKEN_TO_BE_REPLACED

Today started off pretty rough.  I was off to class this morning, having left at the latest possible time for not arriving late (as usual), and right when I got on the highway, I realized that I did not have a distinct memory of shutting off my hair straightener. The worst thing is, I didn’t even end up using the hair straightener, after letting it warm up.  I did have a vague memory of thinking “I should shut the hair straightener off now, because I don’t think I’m going to use it and I don’t want to forget,” but I was not sure if I had followed through on my intention.

Did I turn around, to save my apartment from being potentially lit on fire by my hair straightener? No – I was late, and had to get to class. The semester is almost over, and I need to teach my students this shit!  But I felt terrible about my (pretty stupid) choice. It seemed irrational to risk my apartment in flames over being late to class.

I was nervous, so right in the hour between my two classes, I skedaddled home to “make sure” it was off. Yeah, I am paranoid. I was half expecting, upon approaching my street, to see fire engines lined up.  There were none. Phew. I ran upstairs and found that I had indeed left it on, but it had seemed like my power outlet strip (into which it was plugged), had turned itself off.  I’m not sure if that is normal, but I was certainly relieved.

In this five minute “home safety” check, before flurrying back to the university, I discovered two packages had arrived for me. One from Herroom and one from Barenecessities.  I was glad they weren’t in flames, too! They had both arrived one week after I had made the order last Friday, and 4 days after being shipped.  My day of nerves was improving!

And boy did it improve.  I got to try on three beautiful bras, all three of which are recent offerings from the full bust world:  Fantasie Mae, Fantasie Ivana, and Panache Black Loren.   All three are padded half cups.

I’ve been on a “find all the beautiful bras!” kick, ever since I finished finding sufficient “basics” in this past year. To be honest, I had mixed feelings about this order of three bras.  They all cost me $50 and up.  I don’t usually spend that much.  So, I was almost kinda hoping that I wouldn’t like them.  Or at least not all of them – and make a return. Or two.  It’s hard to really feel that way though, and mean it; there’s nothing better than learning that there exists another bra (or three!) that fits you!

First I tried on Fantasie Mae in 30FF (my usual Fantasie size), which I bought in the Bare Necessities Friends and Family sale for 25% off.  It retails for $84, so you definitely might want to get this one on sale!  Fantasie Mae is a padded half cup with very thin padding (it does not add bulk to your silhouette).  Take a look at this gorgeous bra: 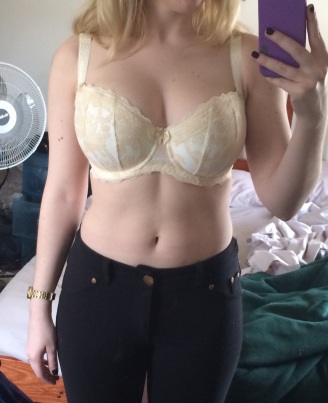 Holy smokes. So elegant and romantic!  And it is exactly like I hoped it would fit. But let’s talk first about the aesthetics. You’ll need a closer look for this one:  END_OF_DOCUMENT_TOKEN_TO_BE_REPLACED

I’m pretty excited to share my first experience with Comexim, a brand from Poland that has become more and more popular internationally over the past few years.  I received the Comexim Joy Longline a few days ago and was instantly amazed.  It is the most beautiful thing I have ever put on my body! Take a look: 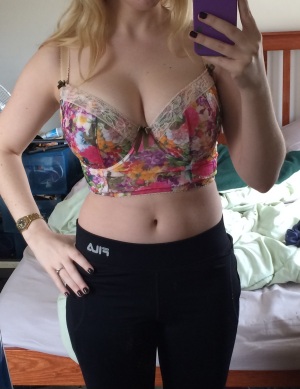 END_OF_DOCUMENT_TOKEN_TO_BE_REPLACED

In my last post, I shared my thoughts about some decent, though less than perfect (for me), “T-shirt” bras in the full bust world.  Let’s take a look at a few more.

I’ll begin with a few versions of Freya’s remarkable Deco.  In my last post I referred quite a few times, by way of comparison, to this firmly molded cup wardrobe staple, which boasts (for many ladies) some of the most voluptuous cleavage you’re ever going to get in a correctly size bra.

Here is the Deco Honey, which has come out in a bunch of pretty jewel-toned colors. It has two neat little buttons at the gore, and the band in the back has a subtle lacey detail.  I am wearing size 28G. 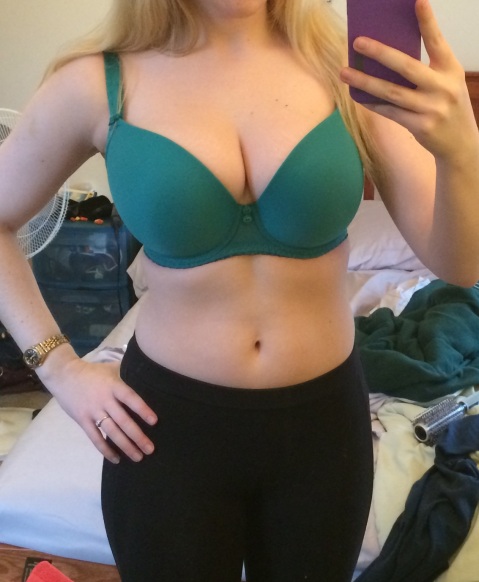 END_OF_DOCUMENT_TOKEN_TO_BE_REPLACED

My name is Little Lucie, and I'm a (high functioning?) bra-coholic. You've come across my "full bust" blog, where I'm essentially just getting down and nerdy with bras and bra-fitting!